Back to the California trip… It’s about time for a famous eatery stop. So on Wednesday (August 3rd) we had hot dogs for breakfast.

We choose Pink’s Famous Hot Dog Stand on LaBrea Avenue in Hollywood. Pinks has dozens of condiments and topping combinations on their famous dogs. The specials are named after famous stars, chefs, TV personalities and landmarks.

I chose the Emeril BAM! Dog. Emeril has a new show called The Originals that featured Pinks on one of the episodes about LA. It airs on the Cooking channel if you’re interested in finding it.

This special dog had cheese, jalapenos, mustard, onions, bacon, and cole slaw. I had to take a lot of the jalapenos off because there were so many they were falling out of the bun. I also am not a huge fan of pickled jalapenos, or bacon for that matter, but the cole slaw pulled me into picking this dog. The combination overall was BAM good, I would get it again! 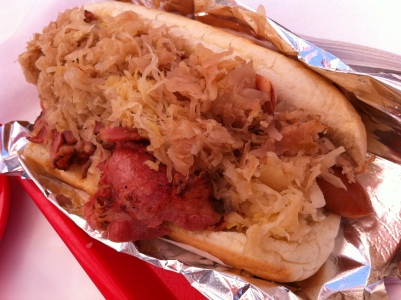 Janeen got the Pastrami Reuben Dog, not named after any celebrity but I think it was famous all by itself. it was loaded with sauerkraut, pastrami, swiss cheese, and mustard. I tried it and it was a mouthful of meat. there was so much pastrami on it, it was falling all over the place. It was a fine dog.

With our bellies full of hot dogs we drove through Miracle Mile and into the La Brea Tar Pits. I’m kind of a science nerd so I thought this stop was great. The Page Museum held a lot of the fossils they excavated from the tar pits. There are also open sites that they are working on that you could observe.

We drove back across Hollywood into Echo Park to eat a late lunch at The Park restaurant, which the wonderful Erin caters to the lunch time crowd. Janeen and I had an identical lunch today. We both got Lucifer Ale, a nice light Belgian with hints of apple.

The Park has sandwich specials that all looked so good it made it really hard to choose just one. I went with some thing kind of light because I ate the hotdog for breakfast… I enjoyed the avocado and Gruyère sandwich piled high with avocado, Gruyère cheese, tomato, and lettuce. I added crispy onions, as per Erin’s recomendtion and spread some Dijon on the grilled whole wheat sourdough bread.

It was nice light and delicious, perfect after a morning of looking at gas bubble out of pits of black asphalt smelling pits.

So we headed out late that afternoon to drive up the coast. We had one perfect stop as we made our way North. I was reading “taste of Santa Barbara” magazine in the car and telling Janeen about this amazing looking Gelato in Montecito. A little bit later she noticed that we were passing Montecito on the highway and said “wasn’t something in Montecito? oh yea, isn’t the Gelato place there?” So I checked the magazine and yes! So we pulled off the exit and 2 minutes down the road we were stopping at Here’s the Scoop for a Gelato dinner.

This place it definitely worth the stop! They let you try any flavor you want and they make everything with local ingredients. Yes, I realize I keep writing about these places using local, organic ingredients, but I am drawn to that so I am either a sucker for people writing local on everything or I just pick really awesome places… probably a little bit of both. Anyway… The gelato and sorbet are out of this world awesome at this place.

I tasted the lavender lemon flavor which was crisp and refreshing but I ultimately decided on one scoop coconut, one scoop chocolate strawberry in a waffle cone. Janeen got Italian chocolate chip (which tasted like cannoli filling) and espresso in a chocolate waffle cone.  All flavors got my stamp of approval and left me wanting more.