I made it through making food at my first yard sale of the season! I did make a net profit – not a huge one but at least I covered my costs and made a little spending money…

I did had a fun morning… I knew it would be fun. A lot of my friends came to visit and I sold a bunched of pickled items too! 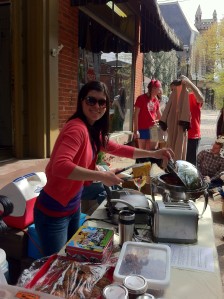 I forgot to take a few good pictures of my setup. I thought I did a pretty good job – I set up a table with my Cuisinart Griddler (one of my favorite kitchen appliances), a toaster, and a buffet server to keep things warm. 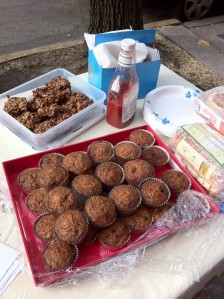 I used this recipe for the trail mix cookies, with some substitutions… I swapped the walnuts for almonds and I added roasted pumpkin seeds and sunflower seeds. They came out really good… so good that I ate about 4 of them today. I also made these muffins that I named “Power Muffins” and they were awesome! I usually make zucchini muffins but I wanted to try something a little different. I read that these freeze pretty well so I made a double batch… although I don’t really know if they will last that long because they are so good. I did sell a bunch of them but I have enough left over that I can take them for my afternoon snack at school this week.

Here’s my eggs and sausages in my buffet server. 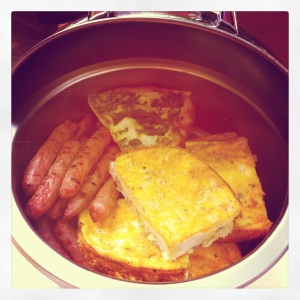 They look pretty nice, though I was disappointed in the buffet server, it didn’t stay hot for very long and it was hard change and relight the sterno. I ended up just heating everything on the Griddler – which worked out great! If you don’t have one… get one! You can heat up anything in a flash! You can also make great Panini sandwiches and the heat plates are interchangeable so you can turn it into an electric griddle. I could have done everything today with just this appliance.

Overall I had a good experience. I am definitely going to set up a stand at my yard sale in a few weeks. It will be even easier to have this at my house. I just have to carry stuff outside and I will be able to use my oven. I also think I might sell more food because we usually have a block sale, so everyone on the block is out and a lot of people in the neighborhood stop by.

I’ll post about my next food table set up soon!

Thanks to all that stopped by and ate breakfast with me!

I spent last night dyeing Easter eggs with some of my friends. My friend Janeen had a bunch of different egg dyeing kits that we used. I also wanted to try some natural egg dyes, like onion skins and purple cabbage.

Here’s some photos of our creations: 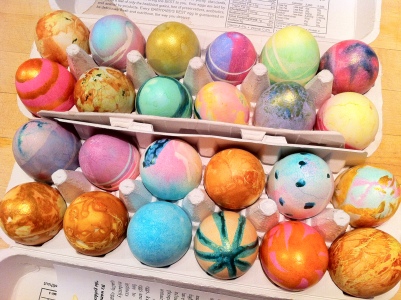 We painted some with metallic dyes… 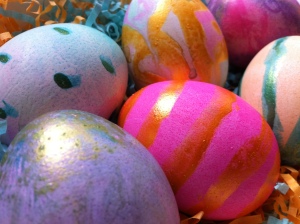 We also made some really cool patterns by twisting rubber bands around the eggs and dipping them in different colors: 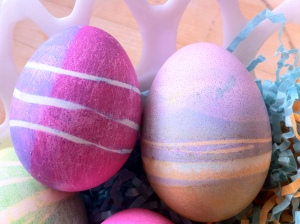 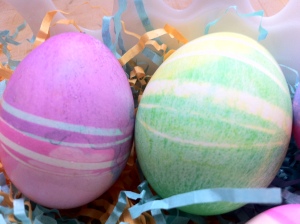 Here’s our eggs we dyed with onion skins. they came out with some pretty neat patterns. We use fennel fronds and cilantro to make patterns by placing them between the egg and the onion skin. 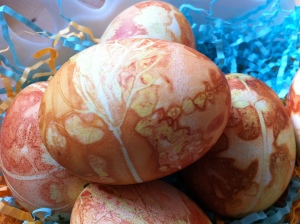 Here’s a link to give you some more specific instructions on how to use onion skins and other natural dyes to color eggs. We didn’t get to use the purple cabbage. I’m saving that one for next year.

Over all, I really like the mix of patterns and colors that are in my egg display this year. 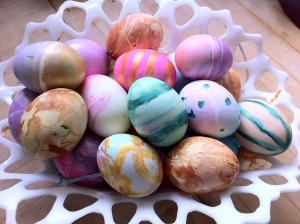 There is no way we are going to be able to eat all of these beauties this week so I intend to pickle a bunch of them!

I followed this night of dyeing eggs with a great baked egg breakfast. I made my favorite frittata with a big salad made with local early spring greens. 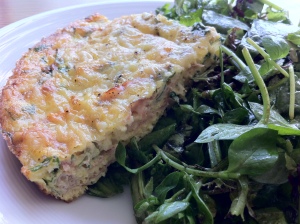 Scramble 8 eggs with 1/4 cup of light cream and season with salt and pepper. 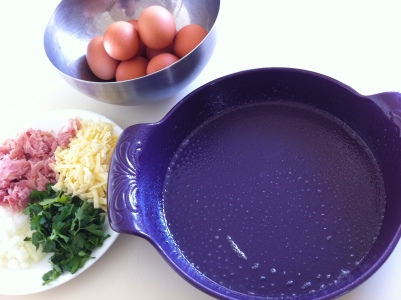 Pour it all into a baking dish (sprayed with non-stick spray) and bake at 350 degrees for about 20 minutes (until the center is firm). 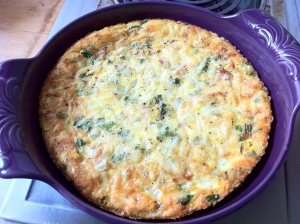 A delicious and easy brunch to start off the day! If you’re lucky enough to have tomorrow off, give this recipe a whirl! It is also great to make and put in the refrigerator. It heats up in the microwave just fine so it makes a great quick breakfast.

I hope everyone had a great Easter!

On our Tuesday (August 2) in California, we headed down to the beach towns. We strolled along the Third Street Promenade in Santa Monica in the morning to window shop and have brunch. We chose a little french cafe in the middle of the promenade called Monsieur Marcel. We sat outside watching passer-bys. I ordered the Benedict Marcel- poached eggs atop a buttery croissant with smoked ham and Hollandaise sauce. 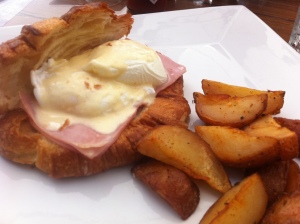 It was good, a solid take on eggs Benedict, but not the best I have ever had… Janeen asked me where the best eggs Benedict was and I immediately replied two places… The Nodding Head Brewery in Philadelphia (they have sunday brunch with excellent bloody marys) and this little shack (can’t remember the name of it) beside a river in Connectitcut that I stopped at on the way back from cape cod. 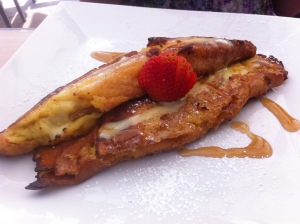 Janeen had the souffle french toast. I tried it – it was super-good! It was so good I wished I had gotten in. It was soft, fluffy, buttery and it had a slight citrusy taste to it. French perfection, that’s what I would call it. If you ever find yourself eating brunch in Santa Monica, I highly recommend it.

We checked out the pier and rode the ferris wheel to get a birds eye view of everything.

Then we took a tip from Erin’s friend and went to The Lobster for a large bloody mary with a giant prawn and olive attached to it. It was a good bloody mary, kind of mild but really impressive looking. It was a nice break from the sun and we got some post cards written. 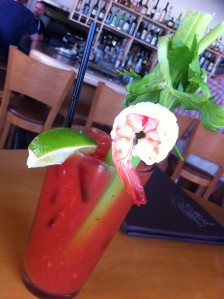 We rented bikes and rode the sandy bike trail down to the complete spectacle that is Venice beach. We locked the bikes by the skate park where skaters were zooming around the concrete learning tricks. The two headed turtle was out in front of the freak show and it seemed all the usual buskers were out.

We stopped into a cafe that was set back a little from the boardwalk. They advertised Peach Chai, which sounded good, so we decided to try it. Not really that great, it was ok but I would def not go there again. Janeen got an iced vanilla latte that was so sweet she didn’t even really drink it. I can not remember the name at all but I don’t think I’ll be going back.

We walked the whole ocean front, headed back to our bikes, and rode back to Santa Monica. On our way out, we knew there was going to be a lot of traffic and it was going to take a long time to get back, so we got a snack. We sampled the frozen yogurt at PinkBerry. It is all fat free and made with ultra fresh ingredients. 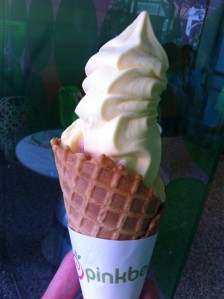 We both got waffle cones. I tasted the salted caramel, a great little bite but a bit too rich to eat a whole cone. I went with pomegranate and mango swirl with strawberries in the bottom of the come. Janeen stuck with the strawberries and got chocolate and original side-by-side in her waffle cone. I wasn’t sure what to expect because I know some people love Pinkberry and some people don’t. It is a chain that I usually only see in big cities, I think they have a good business plan. I thought it was tasty, but wait until you read what we had on Wednesday…

We had to rush once we got back to Erin’s place because we were going to her comedy show in Downtown LA and we didn’t have much time. Erin was nice enough to make us dinner. Arugula salad with lemon vinaigrette with little cukes and avocado slices. 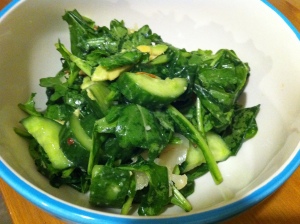 She even cut up some pickled cauliflower (from giardiniera) and added slivered almonds. Great salad Erin! We also had pasta with olive sauce that we got at Global Gardens on our wine tasting adventure. 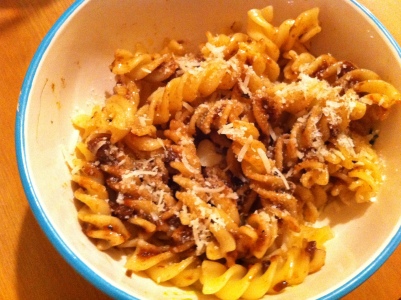 Erin’s comedy show was great! It was at a theater called the Downtown Independent. Finally a place with some Sierra Nevada! Good beer, good laughs. Thank you Erin for a wonderful evening!

During the summer, I really take time to enjoy the morning. I could sleep in a little bit, relax, read the paper or a magazine and make myself a great breakfast. I have been creating these towering layered stacks topped with eggs. It’s like an open faced egg sandwich with whatever fresh, local, and in-season ingredients I have from the market.

Here are a few examples: 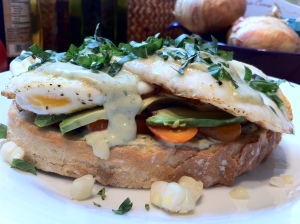 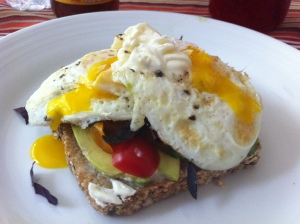 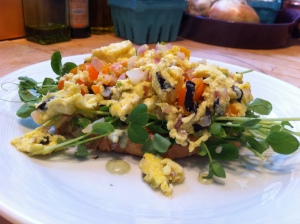 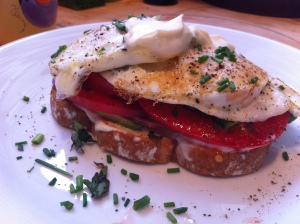 I start with a base of whole grain or some kind of crusty bread. I add a spread on top…two of my favorites are my Green Meanie dressing or Creme Fraiche. I sometimes use cream cheese too. It is really good when it starts to melt under the warm eggs.

Then I add red onions, thin sliced avocados, and some sort of green. I love spring pea shoots which, thanks to the new sprout stand at the market, I am able to find quiet easily now.

Since it is summer and excellent tomatoes are available, I have been putting tomato slices or cut up grape tomatoes on top. Fresh herbs are in abundance as well so I love to add basil leaves or chopped chives.

I usually fry one or two eggs to complete the tower and put a little extra dollop of dressing or creme fraiche on top as well. Sometimes I just turn it all into a scramble, it’s still just as good.