October is almost over and it is getting a bit chilly! Right before the weather began to change I had one fine Saturday at the end of September. It began with an outside brunch with my friends Janeen and Carrie. We sat outside in the sunshine in front of Fork’n’Spoon Cafe  on Prince Street in downtown Lancaster and had a few delicious dishes.

Carrie had the BLT and I had the poached eggs over tomatoes and spinach (pictured above, and perfectly cooked). The french toast that Janeen had (pictured above) was smothered in bananas, walnuts and carmely sweet syrup. Everything was great and it was really nice to sit outside enjoying warm coffee with some of my best girlfriends. I think it’s safe to say that we would all recommend Fork’n’Spoon Cafe, especially for an outside brunch.

I made my way over a block to the Central Market, my favorite part of my Saturday morning routine. I found some great produce at one stand that I really like Stoner’s Home Grown Vegetables. They always have homegrown heirloom veggies and they are now open on Saturdays! 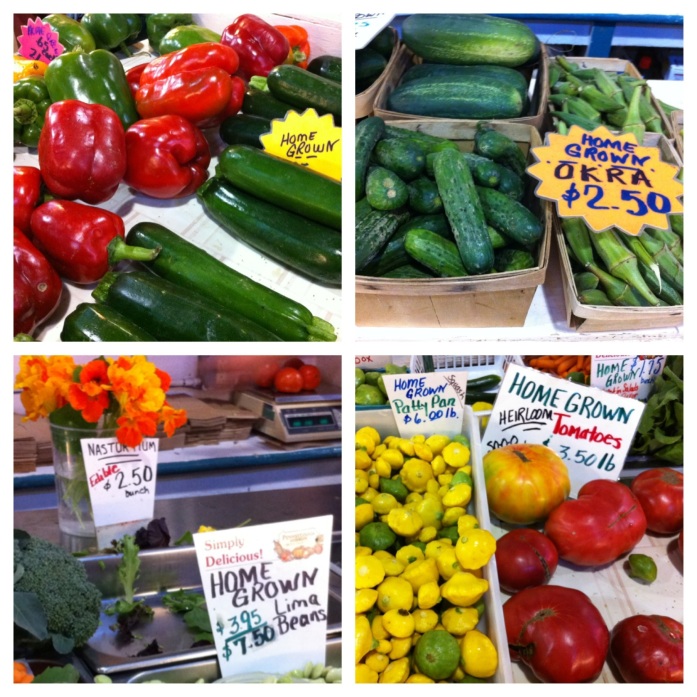 I made this awesome salad later in the week with all the veggies I bought… yes, there are edible flowers in it!

Janeen and I decided to go up to Lititz, PA and spend a little time walking around. There is a new olive oil and balsamic vinegar tasting shop called Olio. While it was quite fun to taste all of their olive oils and balsamic vinegars, I just wish they put out some crackers or bread to cleanse your palate between tastings. They did have water and I tried to limit myself to a few tastings… but I really wanted to taste every one of the olive oils they had.

I loved these metal containers that held the oils and vinegars. I would love one to dispense olive oil in my kitchen. They were beautifully polished and poured the liquids out slow enough to get a small tasting amount. How I wish I could find one of these! I might just have to do some hunting on the internet.

I settled on Moroccan EVOO and Chocolate Balsamic vinegar – both of which I plan to use on a salad with fresh strawberries and maybe some Parmesan cheese.

Olio also carries several salts, spices, their own condiments, olives, and various other goodies. I saw this long pepper (below) and I wanted to try it. So far I have used it to spice up sauces, veggies, and braised meats. It is actually a dried cattail reed. I have been crushing it up with a mortar and pestle, it smells very fragrant and adds subtle flavor.

So… Lititz has a wine tasting room now.

Waltz vineyards opened a small wine tasting room where you can taste wines for $5. Their vineyard isn’t too far away, located in Manheim, PA. We learned that they offer tastings with cheese parings regularly and they also hold a few paring dinners a year at the vineyard. I will probably be visiting the actual vineyard soon. Some of the wines that this winery produces are probably the best Pennsylvania wine I have ever had. Pennsylvania wine is usually too sweet for my taste but this vineyard has a few wines that range from slightly sweet to very dry. I am not going to pretend that I know a lot about wine… but I did like their Merlot.

We spent the rest of the afternoon walking around some of Lititz’s little shops. Most are kitschy but it was such a beautiful day to walk around the tiny town. We finished our visit with little rest at a sidewalk table at the Bull’s Head Public House, enjoying a pumpkin ale and the crisp air.

And, yea, we stopped for cupcakes on the way home…

Sublime Cupcakes… they are sublime, but they need some tables so you don’t have to eat them in the parking lot… or I guess you could just get them to go. But seriously, they are delicious cupcakes, very moist with awesome icing! It was a good snack to keep us going until we got to our next destination of this super Saturday…

The end of September brings Oktoberfest into full swing. One tradition that my friends and I have been enjoying for several years now is the Lancaster Liederkranz‘s Oktoberfest. This German Society holds the Oktoberfest at a picnic grove surrounded by trees and decorated with Bavarian flags and twinkle lights.

Did you know that Oktoberfest officially begins with the tapping of a keg of beer? The keg is brought into the fest in a parade-style manner and a baby rides into the festivities on top of.. it is true.

There are many German delights to be had at the Oktoberfest. You have to buy these tickets to purchase anything at the fest.

There are giant Bavarian pretzels… 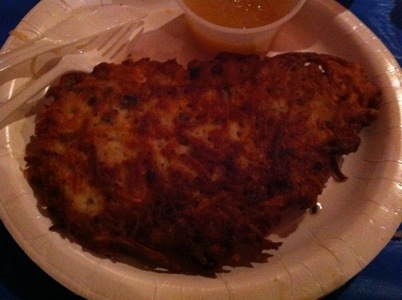 There are also fun activities for kids, like painting Koo-Koo clocks and puppet shows.

German dancing goes well into the night. There are several traditional German dances displayed throughout the weekend. Many of them tell a story and use props like the one shown below. 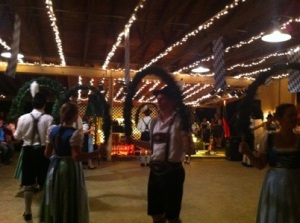 You can even join in the fun and learn how to polka dance and line dance to some German music. Here’s one of our favorite tunes that has a dance that goes along with it – Fliegerlied.

Enjoy the end of October – there might still be time to catch an late Oktoberfest somewhere. I do hope to see some new faces at the Lancaster Leiderkrankz grounds next year!